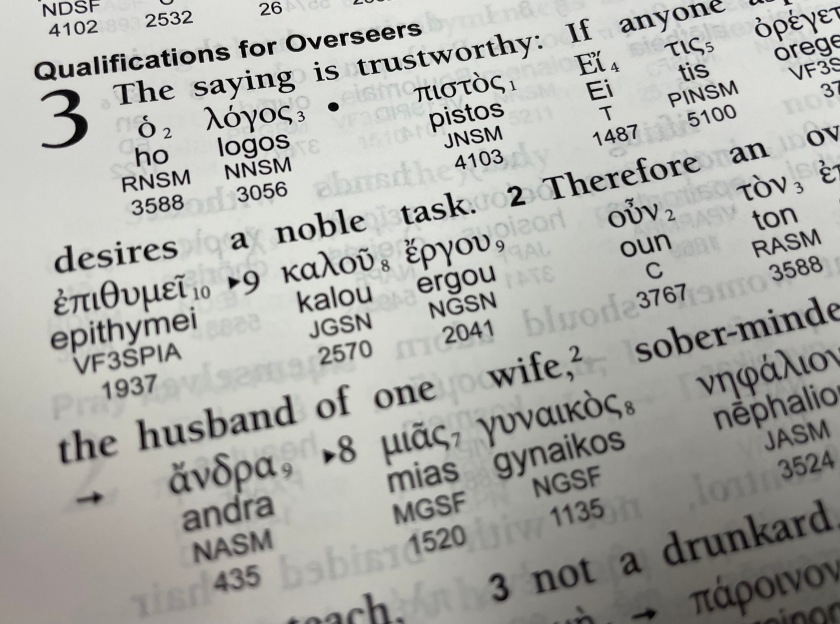 In 1 Timothy 3:2 and Titus 1:6 Paul says that any man who is to be appointed to the eldership is to be “the husband of one wife.” In Paul’s first letter to Timothy and in his letter to Titus he gives important information regarding the required qualifications of these at the time of their appointment, and he briefly points out their duty. Under the heading of their personal qualifications, we find three classifications of their credentials. We have qualifications regarding (1) attitude/character, (2) domestic considerations, and (3) ability/experience. To Timothy and to Titus Paul briefly cites their duty as being to take care of the church (1 Tim. 3:5) and to exhort and to convict (Titus 3:9).

The qualification that I want to address in this article appears in the title. The requirement itself shows that an elder (1) must be a man, (2) must be a married man, and (3) must be a man married to one wife.

Over the years as brethren have attempted to select and appoint elders in various places, the question arose time and again as to whether or not a divorced man met the qualification of having one wife. Evidently, some brethren were not sure if a divorced man could serve as an elder, since he had put away one wife according to Matthew 19:9 and had married another. They were not calling into question his marriage, but they were wondering about whether the Lord intended for a divorced man to serve as a shepherd of a congregation.

As I have discussed in other places, the problem is the failure of recognizing the existence and significance of the “transition era” as men were being divinely transported from prior obligation to current obligation. Before Pentecost, Gentiles had been allowed to have multiple wives. Abraham had a wife and one concubine, and following Sarah’s death, he had another concubine (Gen. 16, 17; 25:6). Isaac had one wife (Gen. 25:20). Both men were non-Jews. They preceded Judaism. Jacob—or Israel—was the head of the Jewish nation. His sons became the heads of tribes that composed that nation. And, in Judaism, men were allowed to have more than one wife.

When the church was established on Pentecost of Acts 2, Jews were present from every nation under heaven (Acts 2:5). And, as already declared, under Jewish law men had been allowed to have more than one wife. Jacob (Israel) had four wives (two free women and two bond-servants or concubines according to Gen. 29 and 30). Polygamy was allowed by the law of Moses. Polygamy is not to be confused with divorce and divorce law (Deut. 24). Men could marry several times and never be involved in even one divorce. In this article we are concerned with polygamy and not divorce. Polygamy was NOT a violation of moral law as such. It was certainly not the ideal marriage arrangement as God demonstrated with Adam and Eve, and as he explained to the Jews through Malachi (Gen. 2:18-25; Mal. 2:14-15), but it was divinely approved in the first two divine systems of accountability arranged by God. Neither Abraham nor Jacob were immoral men because of their polygamy (cf. Matt. 8:11).

And this has a definite bearing on “the husband of one wife” requirement for elders per Paul’s remarks in First Timothy and Titus. It is so because at Pentecost of Acts 2 when the church was established, Jews and proselytes from all the nations were present. And all of those men had lived in a system that allowed them to be married by God to more than one wife. If any man present on Pentecost was in violation of God’s marriage law for the Jews, then he would stand in need of repenting of that unlawful relationship. But our point just here is that if polygamists were present on Pentecost, their polygamy as such was not something for which they were blameworthy or divinely condemned. In fact, if they were in authorized marriages, it was because God had joined them (Matt. 19:6). And whosoever God had joined together under an earlier arrangement (Gentile-ism and Judaism) were not to be put asunder.

The historic condition of the time when the church was first established called for the requirement of the “one wife” rule for the eldership. The divine allowance for polygamy was on its way out as the gospel was preached to all men. And while men with several wives could certainly be faithful Christians if God had joined them to their wives in earlier days while they were still amenable to their prior obligations in Gentile-ism and Judaism, the situation in the “transition era” was changing. And as the gospel became accessible to men, they became amenable to it. And they learned that from then on, marriage was to be monogamous without any polygamy whatever. Paul would come to write in about 57 A.D., “let each man have his own wife, and let each woman have her own husband”(1 Cor. 7:2). This was going to be the permanent and perpetual marriage policy under the law of Christ.

So, while for a while men in the first century church could have more than one wife (if these marriages were contracted under the previous divine systems), God stipulated that such men could not serve as elders, however. They were caught up in a unique situation as they moved in their own human accountability from one divine system to another. And the law of Christ was a higher law than that of moral law in Gentile-ism, and it was higher than the law of Moses. So, there was nothing wrong with the men and women caught in this situation where their polygamy was allowed. It was just that the gospel of Christ was God’s final law to be imposed, and it was to be imposed on all men, and it was a law of higher requirement that that demanded in the previous systems.

And the more restricted requirement of monogamy was to be the permanent marriage law for all men under the law of Christ for all time. God would not, then, allow elders in polygamy to lead his people, many of whom or most of whom in the first century were in better marriage relationships than polygamy allowed. The elders were to be examples to the flock (1 Pet. 5:3). But how could that work if elders were in polygamy (with polygamy being inferior to monogamy) and if some, many, or most of their flock were not? If the gospel was in process of bringing an end to the practice of polygamy, it was not something to be encouraged. If monogamy is the superior relationship (and it is), and if polygamy was about to run out of allotted time, then the marriages of elders in polygamy could not provide an example to the flock as far as their domestic situation would allow.

So, “the husband of one wife” requirement of an elder does not mean that a man scripturally divorced per Matthew 19:9 and scripturally remarried would not qualify for the eldership. In my judgment, that is not in the purview of the restriction. If a man has put away his wife for fornication and has scripturally married another, then he has only one wife. It is the same with a widower. A man scripturally married but whose wife has died certainly has a scriptural right to another marriage (cf. 1 Cor. 7:8-9). And his second marriage does not mean he now has two wives. He still has only one. The same is true regarding scriptural divorce and remarriage.

Finally, it is interesting that in 1 Timothy 5:9 the topic of marriage surfaces again, and this time Paul discusses the “enrolled widow.” This is not to be confused with Paul’s discussion of widows who simply need help. The enrolled widow needs help, but she is enrolled to work for the church. And the widow whom the church can enroll has to meet certain qualifications including the fact that she is a woman who has been the wife of one man. “Having been” or “having become” is a perfect participle which indicates completed action with a resulting state of being. She has been and remains in that condition. Here Paul in context shows that the widow to be enrolled is not to be a woman who has already shown her desire to marry again. Younger widows are not to be enrolled to work for the church. They need to marry again (v. 11-14). But the widow to be enrolled must be at least sixty years old and when widowed remained in that state. Paul could have used the same language in 1 Timothy 3 for the elder that he used for the enrolled widow in 1 Timothy 5, but he did not. So, in the selection of elders, we need not be more restrictive than the language of Paul necessitates.

Whether a divorced man and a widower who has married again would want to serve or ought to serve, and whether or not a congregation might want either man to serve as an elder are other considerations. But the fact that he is required to be “the husband of one wife” or an “of one wife husband” is not a requirement, in my judgment, with which he is out of harmony.